The Life Changing Benefits of Turmeric for Dogs

“Research has shown curcumin to be a highly pleiotropic molecule capable of interacting with numerous molecular targets involved in inflammation. Based on early cell culture and animal research, clinical trials indicate curcumin may have potential as a therapeutic agent in diseases such as inflammatory bowel disease, pancreatitis, arthritis, and chronic anterior uveitis, as well as certain types of cancer.” Ref NCBI

At Fetch we speak with many people on a daily basis about symptoms , illnesses , sensitives and much more that their Dogs are suffering from. We also work with Cara Rescue Dogs , at any one time Cara can have over 100 Dogs in their care of every type breed and this too has brought a lot of challenges and experiences to us.

The biggest success story we have seen is little Oscar , Oscars Mammy contacted us at her wits end. Oscar had been suffering with major skin issues for over 6 months , constantly irritated, itchy sore and oozing. He had lost all his hair from tearing at himself and had began snapping when he was touched (understandably so). Olivia had Oscar at the vets on numerous occasions tried various Steroids , Painkillers , Anti Biotics anything she could try she did. Oscars skin was completely inflamed, we recommended a change of diet to Nourish Rite Grain Free Salmon to help the condition from getting worse but we knew he needed something to also heal the condition. Olivia started Oscar on The Holistic Hound Golden Paste straight away, one teaspoon a day with his food , simple! However as Oscars condition was so bad we were only 70% confident that we would see a full recovery.

I am still to this day shocked when I think of the day Oscar walked into the shop only 2 weeks after first seeing him, it even passed my mind for a split second maybe Olivia got another Bichon, this couldn’t be the same dog only 2 weeks later! But it was little Oscar and he was in great form with his hair already growing back. Below is a picture of Oscar before and after with only 2 weeks in between the pictures. 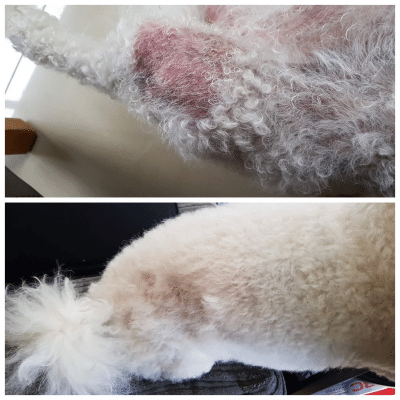 Pain is caused by inflammation so again Turmeric will help with this. Specifically Joint pain such as arthritis , displaysia , injuries and then the obvious pain from inflation of the stomach , skin etc.

The majority of our Clients have began using The Holistic Hound Golden Paste for Dogs that suffer with Hip Displaysia again the improvements these Dogs have seen within 3 to 4 weeks is incredible.

“It can help reduce joint pain better than regular painkillers. Most of the non steroidal anti-inflammatory drugs (NSAIDs) given for treatment of osteoarthritis and to reduce pain are COX inhibitors. COX stands for cyclooxygenase enzymes (COX-1, COX-2).

However some of these NSAIDs are known to cause gastric lining erosion, impair kidney function, cause vomiting and diarrhea, increase bleeding risk and may even prevent formation of cartilage.

Interestingly curcumin works on the same principle as these drugs (inhibition of COX enzyme) but does not cause any side effects. Curcumin by suppressing nuclear factor-kappaB inhibits the activity of COX-2 which contributes to inflammation in bone cells and pain in osteoarthritis. ” 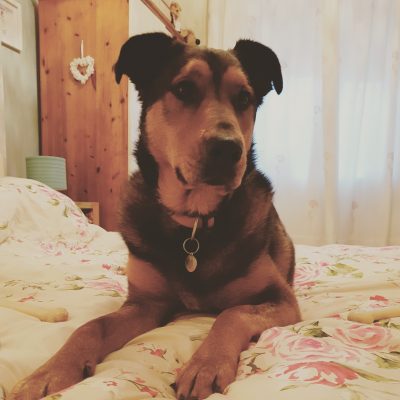 Many of you that follow our Facebook page or come to the shop would have heard many stories about my gentle giant Ameera. I adopted Ameera from Cara when she was 4 months old after she had been dumped in a foster with her sister who unfortunately did not make it. I always thought she was a German Shepherd X but earlier this year I got her DNA done and it turns out she is a Rottweiler X , but from 6 months old I knew Ameera was struggling with her Hips. Since I have been involved in Pet Nutrition for many years I knew there was nothing more I could have done to prevent this. it was genetic. However I knew I could help ease her pain and progression of it through Natural supplements to avoid long term pain killers that would hamper her in other ways. This was the first time I used The Holistic Hound Golden Paste and it is absolutely changed her life, 2 years on and you would not know Ameera had hip displaysia now. I have gone from lifting her off the floor to help her up to watching her spring up and down off the couch like any other 4 year old Dog. It has transformed her life in so many ways , I always worried about being able to keep her comfortable in her more senior years but The Golden Paste has changed that. 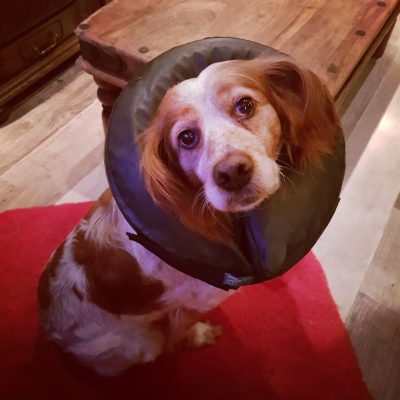 Cara Rescue Dogs were contacted by a Vets about Meela this time last year, she had been knocked down by a car and was in a very bad way. We immediately collected Meela and brought her to our Vets that specialize in Orthopedic surgery. Meela had suffered two breaks to the pelvis and a break to her back leg. The poor girl had been used for breeding all her life and at 6 years of age was now going through the worst pain anyone could imagine.

After extensive surgery Meela was in recovery mode but due to the lack of use of both back legs this had led to severe muscle loss and the joints and bones in general were completely inflamed and painful. We started Meela on The Holistic Hound Golden Paste and within 6 weeks she was back walking, even doing a little skip and happy in herself pain free. There was a combination of Physiotherapy , pain killers in the initial weeks and general vet care but the long term thing that will help Meela is The Holistic Hound Golden Paste and it really has transformed her life.

Needless to say we fell in love with Meela in no time and she now has her forever home with us! Bless her she just absolutely adores and sort of attention after having such a tough life before this.

In order for healthy digestion to take place the liver must produce bile to break down fat. If this system is impaired, liver, gallbladder and intestinal issues can arise. Curcumin has been proven to stimulate bile production. Underweight, extremely active and pregnant/nursing dogs all require more fat in their diets, so Turmeric can be especially beneficial for them.

Again we have seen massive improvements with Dogs in our care with the use of Golden Paste , God knows what conditions Dogs have been in when they have been straying or in The Pound and before it could generally take a couple of weeks to get their digestive system back on full track. However with The Holistic Hound Golden Paste many Dogs are producing firm stools within 48 hours, its anti inflammatory agent and ability to help rid the body of bacteria is fantastic. The Holistic Hound Golden Paste along side a good nutritional dog food such as Nourish Rite has helped us get Foster Dogs back on track quickly.

Several studies conducted by the National Center for Biotechnology Information(NCBI) have shown promising results in using Curcumin with cancer patients. The herb seems to affect cancer growth as well as development and spread at the molecular level. It has also been shown to inhibit the growth of blood vessels within tumors and contribute to the death of cancer cells.

Overall there is very few ailments or illnesses that Holistic Hound Golden Paste cannot heal or at least improve. It gets 5 Stars from us at Fetch and many of our customers.